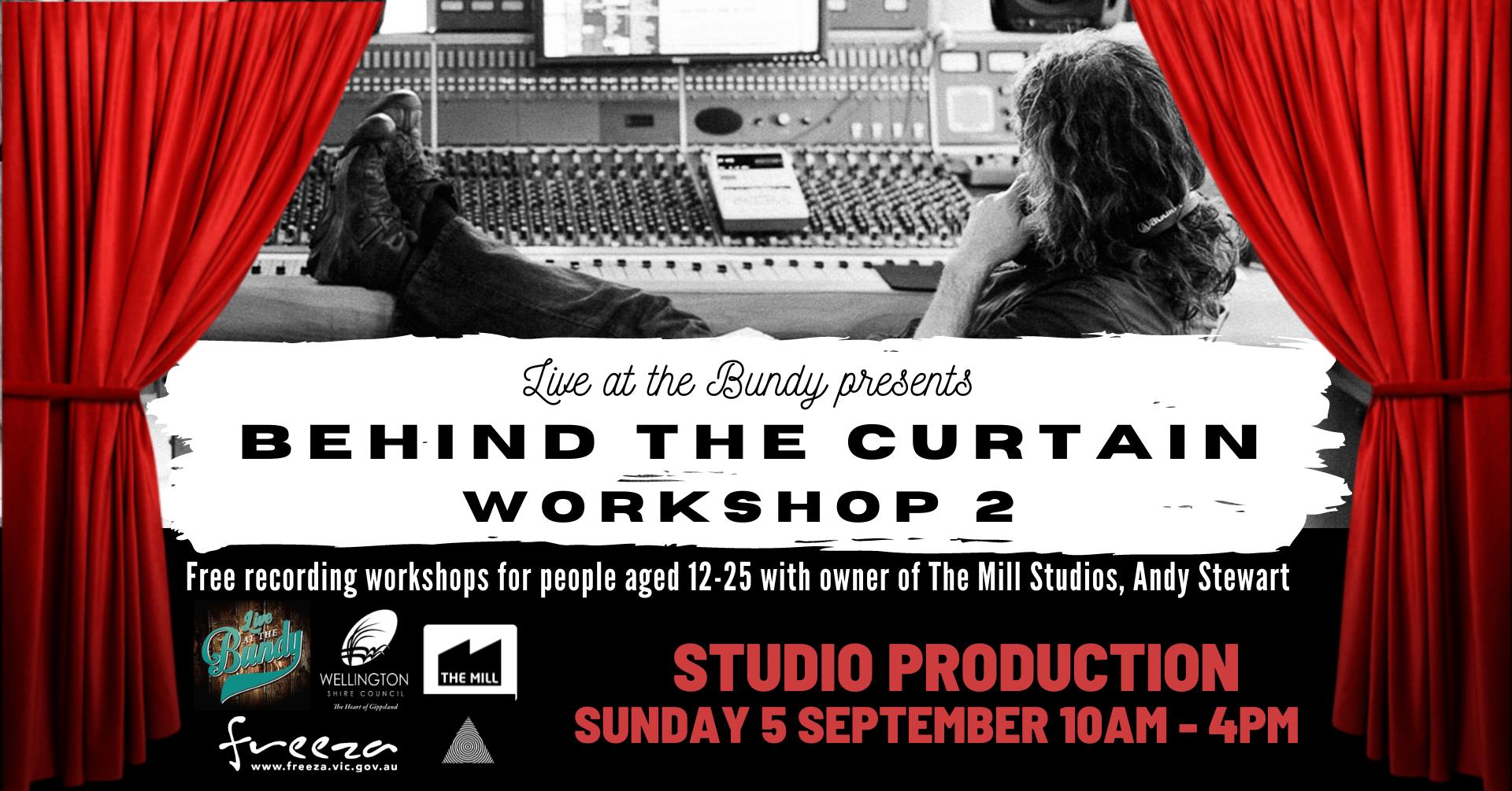 Bundy Hall
794 Sale Maffra Rd
Bundalaguah, Vic 3851
Australia
Map Bundy Hall
Workshop #2
Are you interested in a career in the music industry? Be it on stage, sound and light production or management?
Live at the Bundy, in partnership with the Wellington Shire Council and youth group Propeller, are creating a series of workshops aimed at youth (15 – 25), learning from music professionals. These sessions are free and will run up to four times per year but are limited to 20 people only.
Our second workshop for 2021 will be delivered by full-time acclaimed audio producer and owner of The Mill Studios, Andy Stewart.
This session will be interactive and cover the following topics plus much more:
Home recording basics
How to develop ‘your’ sound
Correct use of Microphones & recording techniques
Critical listening (opportunity to share your recordings in a supportive environment)
Being prepared.
Getting the best out of your equipment
The session will run from 10 am – 4 pm with lunch provided. Bookings are essential via liveatthebundy@gmail.com
ABOUT ANDY STEWART
Andy Stewart has had 36 years of experience in the audio industry, recording, mixing, mastering and performing. He’s acquainted with every aspect of the production process and is widely regarded as a master of his art.
Andy began his long career as a drummer in several independent Melbourne bands. Quickly discovering a love for all things studio related, Andy developed a desire for recording and mixing that has earned him the reputation as one of Australia’s most highly regarded producers/engineers. Having worked with acts as diverse as Gotyé, Paul Kelly, The Whitlams, CW Stoneking and Kutcha Edwards – along with countless others – Andy has an extensive back catalogue of independent and commercial albums to his name. Brilliant at drawing out the strengths of any artist he works with, Andy has a reputation for insightfulness, sensitivity and practicality. He is also well known for his deep passion for music, and a seemingly unquenchable appetite for new, ground-breaking artists. Widely regarded as a ‘golden ear’ of the industry, Andy is a talented mix engineer with a delicate touch, a fine ear for detail, and a reputation for inventiveness and imagination. He is also a formidable mastering engineer. Andy is also well known, both in Australia and internationally, for his insightful articles on all things pro audio. For 10 years he was editor of AudioTechnology magazine, travelling extensively worldwide and earning the reputation of one of the world’s most passionate audio writers. For the last eight years, he has contributed monthly to the Australian publication, CX Magazine.
An audio production facility like no other
Andy Stewart’s studio in Bass Coast Shire is called The Mill. The facility combines cutting-edge digital with classic analogue audio equipment to create world-class results that speak for themselves. The Mill is a haven for musical creativity. Consistently producing world-class results, it offers a vast array of cutting edge and vintage audio equipment that has been used to extraordinary effect on a wide range of recent albums, including Gotyé’s ‘Making Mirrors’ (which won three Grammys, including Independent Album of the Year in 2012), legendary artist Paul Kelly’s ‘Spring and Fall’, Brighter Later’s ‘The Wolves’ and most recently Kutcha Edwards’ ‘Circling Time’.
Andy Stewart is widely regarded as a one-stop-shop for all things audio. He is as comfortable mastering an album as he is producing or mixing, and his production facility, The Mill, has become one of the most sought after studios amongst artists and producers Australia wide.
Recording
The Mill boasts a diverse array of esoteric pro audio equipment that’s the envy of most private studios around the world. With a Neve console at its heart, outboard gear to die for and an extensive vintage microphone, guitar and keyboard collection, The Mill is a recording musician’s paradise. From the old Fairchild compressor and half-inch valve Studer tape machine to Wurlitzer keyboards and pianos, there’s a classic gear in every corner of the studio.
Mixing
Becoming more crucial than ever as more and more bands record more and more channels of audio, mixing is a difficult art form to master. Andy has been a professional exponent of this craft for over three decades and is widely known for the unique combination of skill and imagination he brings to each and every project. Sometimes lush and deep, at other times in-your-face and loud, Andy’s mixes are diverse and imaginative, and always intriguing.
Mastering
Andy is also renowned in Australia as a subtle, sensitive and responsive mastering engineer. He’s mastered countless albums over the last 20 years and, these days boasts a loyal and diverse clientele. The Mill boasts a wide collection of digital and analogue mastering tools, including high-end Neve, SSL, Pultec and Avalon EQ and compression, and a variety of tape-based formats. The studio produces masters for any audio format, suitable for streaming, vinyl and CD